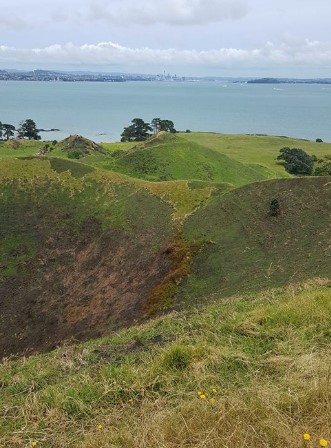 Grass on Brown’s Island is recovering well following the fire that blazed on the island.

Browns Island (Motukorea) is looking lush again and recovering well after more than 13 hectares of land on Auckland’s Hauraki Gulf had been blackened by fire.

Firefighters were called to the pest-free reserve, which is also known as Motukorea, in November  after a woman, who was stranded on the island, lit a small fire to attract attention from passing boats but the fire soon got out of control due to winds.

Parts of the island, which is south of Rangitoto Island and about 5.5km from St Heliers in Auckland’s eastern bays, were engulfed in flames following the accidental bush fire.

Auckland Sea Kayaks is happy to report  that the Department of Conservation has said that no native trees or birds were burnt in the fire and that the flames did not reach the island’s beaches – where native shorebirds including dotterel and oyster catchers nest.

It is home to Maori and European historic sites and artifacts, including remains of stoned-walled gardens that were still in use when the first Europeans visited the island in 1820.  Fortunately these historic sites were not affected by the fires and the island is on track to make a full recovery. Check out how good it’s looking from our photo taken last week on our half-day trip to the island.

No ferries travel to Browns Island, and access is restricted to private boats, seaplanes and sea kayaks. Brown’s Island is managed by the Department of Conservation and Auckland Council.

Sit On Top kayak vs Sit In Kayak