North Island saddleback are conspicuous and easily observed on our Rangitoto Tours. They call frequently, particularly in response to disturbance, and are very active, noisy foragers. They are about the size of a European blackbird. Saddlebacks were widespread at European contact, but rapidly declined on the mainland following the introduction of predatory mammals, especially ship rats and stoats. By the early 1900s, North Island saddlebacks were confined to a single population on Hen Island (Taranga) off the northeast coast of the North Island. A series of successful translocations was initiated by the New Zealand Wildlife Service in the 1960s, and there are now 15 island populations and five at predator-fenced mainland sites. They were introduced on Rangitoto and Motutapu during the summer of 2012-12. 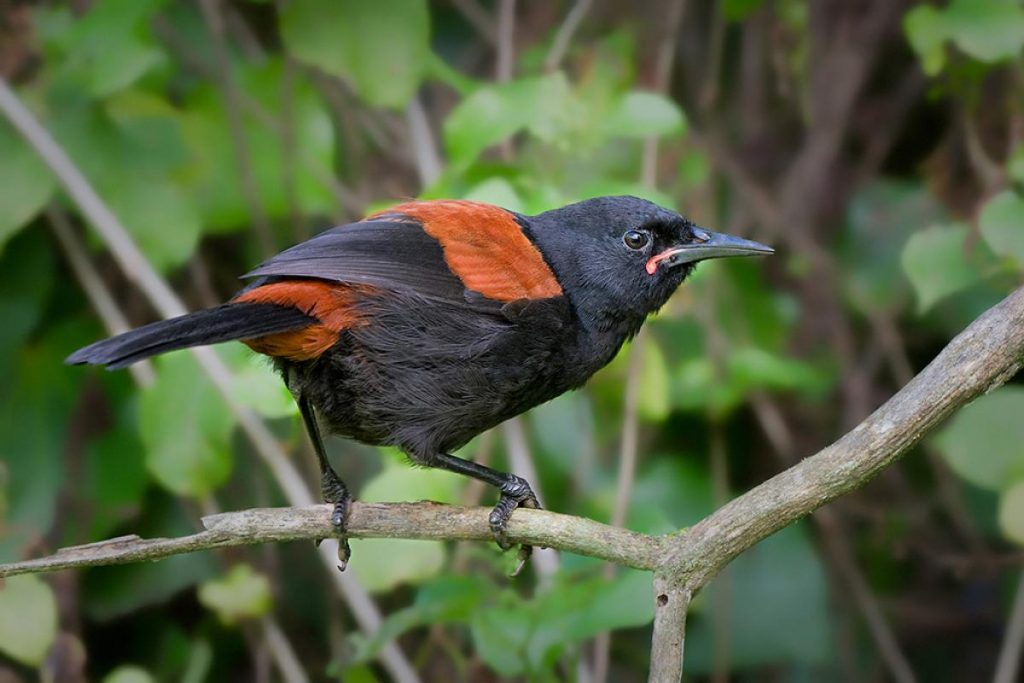 To hear them call

North Island saddlebacks can be very abundant in suitable habitat free of introduced mammals. Recent population estimates suggest there are more than 7000 birds across all populations. However, many of the island estimates are not based on formal counts and the actual number is likely to be much higher.

Cavity-roosting and nesting behaviour makes North Island saddlebacks extremely vulnerable to predation by introduced mammals. Therefore, they can only exist at sites where exotic mammalian pests are either completely excluded or are at virtually zero density. Translocation has been essential for the conservation management of North Island saddlebacks (see Distribution).

Typically spring and summer breeders. Female North Island saddlebacks build a cup nest of vegetation in tree cavities, rock crevices, tree fern crowns, epiphytes and in dense ground level vegetation. Artificial nest boxes are used on some islands. The clutch size is 1-4 and they can rear up to four broods in a season (typically 1-2 in established populations). The female incubates and broods but both parents feed and care for young.

North Island saddlebacks are extremely active foragers utilising the forest floor to the canopy. They often have other species in attendance whilst feeding, particularly fantails and whiteheads. They use their bill as an anvil to chip away at rotten wood, investigate under cabbage tree skirts and epiphytes, burrow into leaf litter and glean branches, trunks and leaves. They are relatively weak fliers but have very stout legs that are used whilst feeding and for bounding through vegetation.

Tara Mulvany sold out presentation Auckland 5th of May, 2016