These lava caves were carved out by the volcanic flow that shaped Rangitoto island.

Only a 15 min walk from the Rangitoto Summit, on the eastern side, visitors can walk through some of the seven known lava caves.

These lave tubes are left behind after the passage of liquid lava. The lava tubes are formed when low-viscosity molten lava known as pahoehoe flows and cools on the outside due to contact with the ground and air, to form a hard crust. This crust allows the still-liquid molten lava to continue to flow inside. At Rangitoto the large tubes are cave-like.

These tubes/ caves are visited on most of our Rangitoto Day and Sunset tours and all equipment is provided. 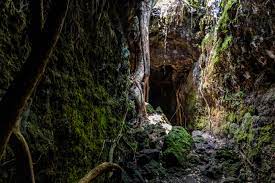 Storm petrel back in the Hauraki Gulf