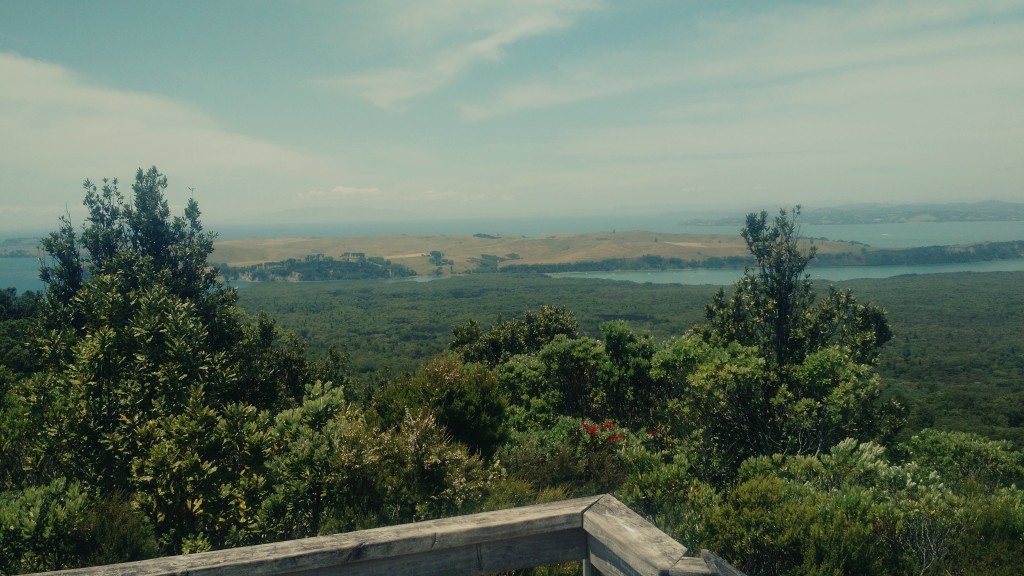 My first sea kayaking experience in Auckland began at the  ferry building around eight am, when I met with Chris, one of the guides at Auckland Sea Kayaks. He drove everyone down to the launch site at Saint Heliers, a beautiful seaside suburb of Auckland. I didn’t know what to expect from the trip since I’ve never been kayaking on the ocean before, but I shouldn’t have worried—as unbearably cliché as it sounds, it turned out to be one of the most incredible days I’ve had in a long time. We started out on the beach with six guests hailing from New Zealand, Poland, the U.K. and Canada. Chris walked us through a team building activity so that we could get acquainted with one another, which was helpful given that we were going to be spending the day together. Everyone on the trip was amazing; it was nice to spend the day with such spectacular people. Even though our experience kayaking ran the gamut from those who had never been on the water to one man who had been a guide for a number of years, everyone had a fantastic time regardless of their experience level. 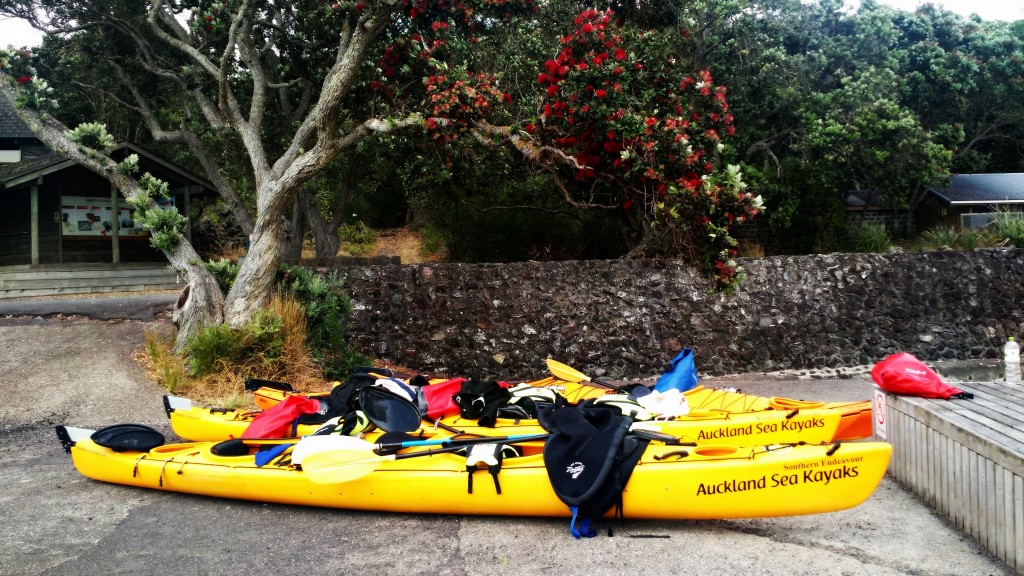 Our kayaks near the wharf at Rangitoto

The paddle out to Rangitoto Island was spectacular; the weather was perfect, the breeze was refreshing and the water was calm. At the beach I was nervous to head out in the kayak for my first trip on the ocean, especially since I was in a double kayak with Chris; I didn’t want to make a fool of myself while in the same kayak as our guide. Of course I had nothing to worry about—not only was Chris patient and understanding, but sea kayaking turned out to be spectacular! Being so close to the water is exhilarating and the ocean breezes make you forget how strenuous the paddling is. In fact, the hour long paddle to the island felt like 20 minutes to me and I couldn’t believe that we had just paddled 4.5 km. When we got to the island Chris told us all about its history; take the tour yourself if you want to hear the interesting tidbits he told us! 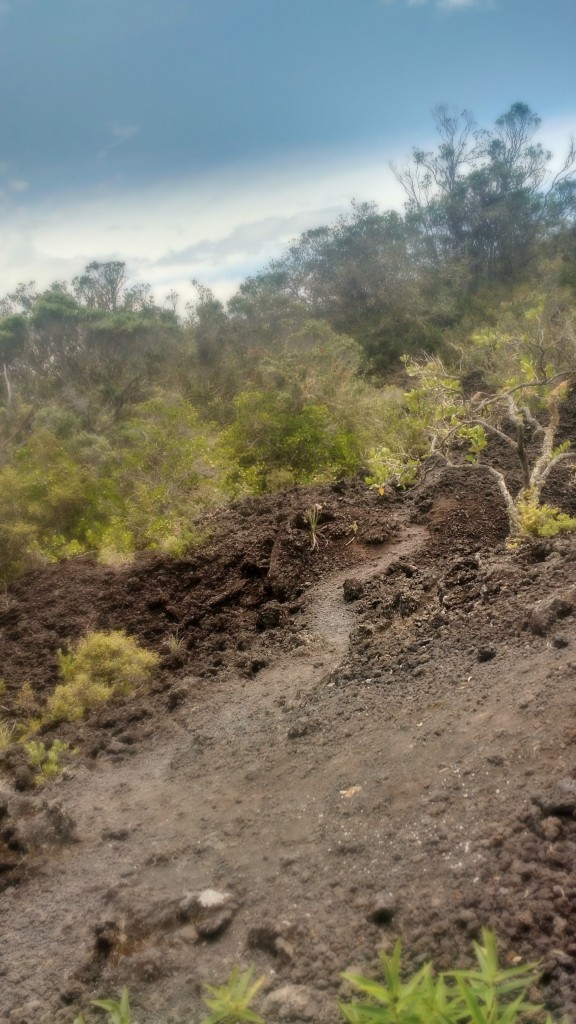 One of the paths to the summit of Rangitoto

For lunch we had freshly grilled steak, muffins, salads, juice, water, coffee and tea. The food was amazing, which was good because we would need all our energy to hike up Rangitoto. Although steep and strenuous at points, the hike was worth it for the amazing 360 degree view we were afforded at the top. Of course the view wasn’t the only amazing part of the island. Chris also took us through one of the island’s many lava tubes, a cave formed by flowing lava moving through the hardened shell of a lava flow. We had to crawl through the first part of the cave but then it opened up and we could see the spidery tree roots dangling from the ceiling like lights in a cathedral. Once we climbed out of the tube we headed up to the summit. From there we could see all of Auckland, Brown’s Island and St. Heliers Bay. It was also nice to look back at the bay, see how far we had come and watch the tiny boats cruising around below us. I kept spinning around to make sure that I didn’t miss any of the view; it was spectacular no matter where I looked. After a break at the top we headed back down the path and rested for a bit where we had left our kayaks. It was nice to jump into the amazing blue water and cool down. I was impressed with how beautiful and clear the water was—it even rivaled the oceans I’ve been to in the Caribbean. 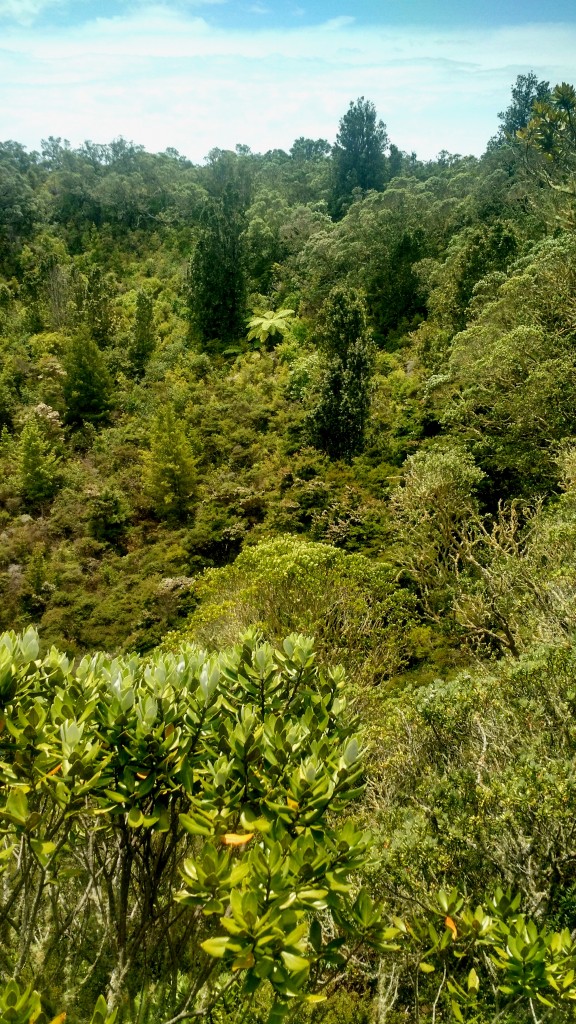 The crater of the Rangitoto volcano

Once we were ready to go and well rested we put the kayaks in the water and started back to the bay. The wind was at our backs so the trip took us less than an hour this time even though we were tired from our long day. Chris showed everyone how to ride our kayaks on the waves back to shore and we all had fun racing each other through the water. When we got back to the beach I was exhausted but I hardly noticed until I got back to my bed. The trip had been so amazing that I felt ready for anything even as we landed on shore. Sea kayaking is definitely an amazing experience and the many islands and bays around Auckland mean that there are a host of amazing destinations to explore. I definitely recommend sea kayaking to everyone visiting Auckland—advanced kayakers and beginners alike.